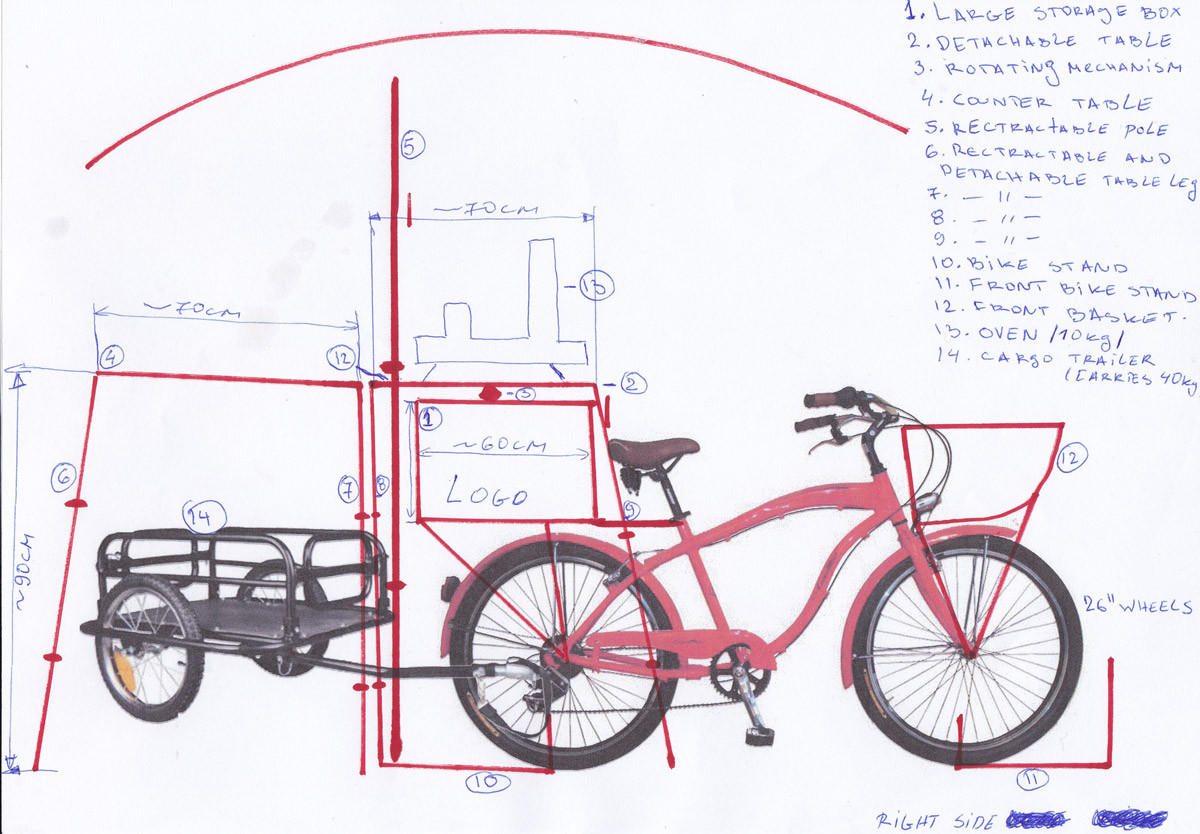 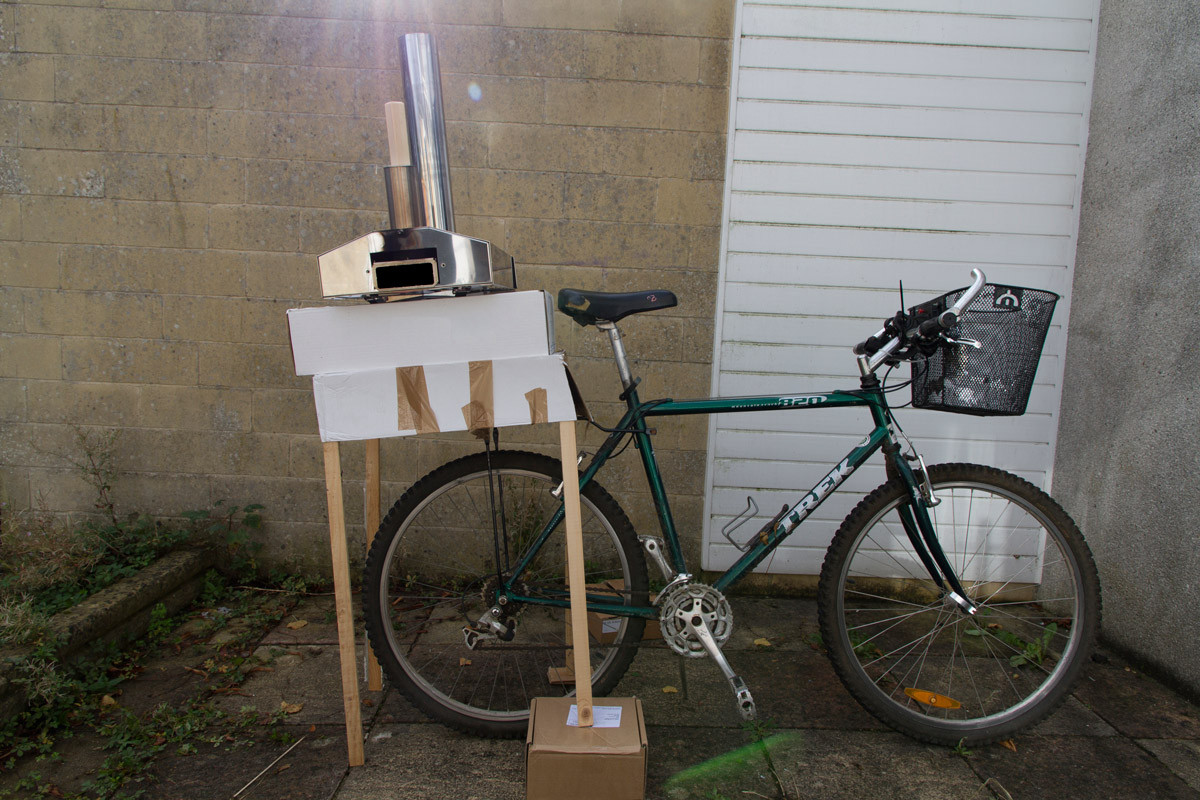 Then I did a bit of research and found a few companies that specialized in cargo bikes and bike modifications, I send them the “drawings” and asked how much is going to cost to build my prototype of a bike with an oven on the back. Soon after I’ve got the following replies

I am going to decline to provide a quotation for your project as, in my opinion, putting a cooker on the rear rack of a normal bike will make the bike very difficult to control and it will be unstable when you are not sitting on the bike. The load is behind the axle of the rear wheel so the bike will want to tip up when you are not on the saddle.
The project is interesting but I don’t think that trying to fit it on a normal bicycle is something that I would want to build.
A tricycle would be more suitable.

I wish you good luck with your project.

What your describing sounds quite tricky and complex, it might be best to have a chat over the phone or in person. A market stall type bike is really best accomplished on a larger more solid base like a tricycle.
It will be very hard to accomplish everything you have detailed and fit into a hatchback. Please drop by or call us and we can discuss it in a little more detail, if we understand what loads you are carrying, we might have a better suggestion.
Kind regards

Unfortunately both companies that I’ve contacted were based quite far from Bath and I had neither time or money to spend in travelling and discussing the project in person. The idea of a tricycle was really good option for something like that, but you can’t put a tricycle on the back of a Renault Megane hatchback, neither you can keep it in your living room, neither I had enough money to buy a trike. Also there was that thought in the back of my head whispering “The Pizza Bike, The Pizza Bike” not “The Pizza Trike, The Pizza Trike”.  At that moment the only realistic option I had was to get back to the drawing board and start thinking how I can do it on my own. Let’s make this clear from the beginning  – I’ve done quite a few different jobs so far in my life but by no means I’m not an engineer neither mechanic or fabricator. But If you believe in something, put some effort in it and keep trying It’s inevitable that you will succeed at the end! Fortunately for me we live in the era of online shopping where you can buy pretty much everything online and with a bit of research and imagination you can build quite a few things. I started ordering all kinds of parts that on its own didn’t make a lot of sense but when I put them together the whole picture started to look like something quite real and possible. I spend most of my own time in November, December and January drawing, designing, measuring, researching and discussing the whole project with friends and family which were crazy enough to support me in that venture and encourage me to move forward. 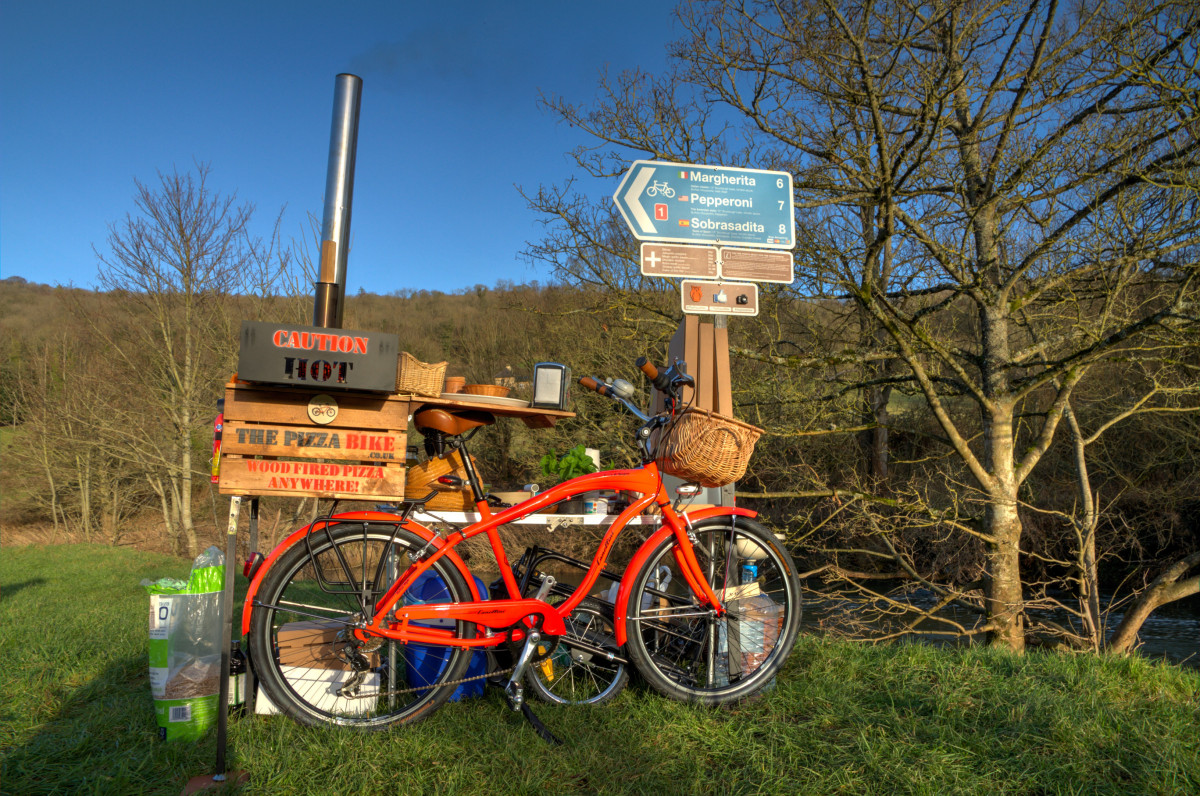 So after a few months of development and post production I managed to visualize one of my crazy ideas and turn it into something absolutely real! It might sounds crazy, silly or whatever but the feeling to create something that never existed before is absolutely amazing and I hope that everybody can experienced it one way or another!